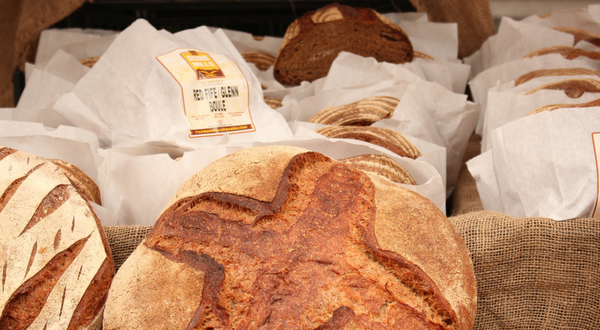 This is a post by Reed Cowan whom I met earlier this year at the 2016 Meditation Teacher Symposium in Sedona, Arizona. Reed presented a workshop titled Mindfulness, Meditation & Media .. which was totally entertaining and insightful, I laughed and I learnt (the best mix).  Reed is an extremely accomplished journalist, documentarian and meditation teacher, and you can read more about Reed and where to follow him, at the end of this post.

So this morning when I woke, and with some trepidation opened my iPad to see what was going on in the world (what with the earthquakes last night in New Zealand, and the unrest, confusion and high energy post-election in America) .. I saw that Reed has posted an article, something about bread (wt ?) in a private group of certified meditation teachers and our leader, Sarah McLean. Thank goodness I chose to read this first.

This totally set the RIGHT tone for my day.

So, thank you Reed for allowing me to share this wonderful post with the Quiet Mind Meditation community.

Thoughts on a post election America and meditation
by Reed Cowan

Sound may not be a barrier to meditation, as Sarah McLean teaches us. But what about the collective shouts inside each of your minds and hearts after such a tumultuous election cycle? What about the shrieks of mourning or gloating flying about on the energy patterns as, on Wednesday morning, we woke up to “the news?”

I, for one, have had a hard time turning it all off, when trying to turn it all off to find my center. And this morning, I anticipated that my 33 students in Las Vegas would likely have the same difficulty.

So last night, with news reports of thousands protesting blaring on TV and radio, and with my Facebook feed full of people calling “the other” stupid, bigoted, criminal, etc. etc. etc. I took my kids to a little sandwich shop to just get away from everything. There, on the shelf of Kneaders Bakery, was the answer: BREAD.

My own still, small voice whispered: HELP THEM BREAK BREAD.

I resisted, at first, as my mind did the math of how many loaves I would buy, what kind of overage I’d have if nobody showed up to class, what I would do with the left over bread, what flavors I would even buy….

And then the whisper: HELP THEM BREAK BREAD.

Soon, I found myself loading my arms up with loaves of pumpkin bread and cranberry bread, paying for it all and stacking it in a bag, leaving the cashier to wonder what the Hell the guy who tells the evening news every night was going to do with so many loaves of bread.

I bought them out of every loaf.

The next morning, while readying myself for the experience designed to clear a path where we could all go to silence, I really didn’t know what I would say, or how the whole thing would come together. I simply loaded up paper plates, a knife to cut the bread, and napkins.

BREAD IN A YOGA STUDIO? This is nuts.

Kids and hubby loaded in the car, we were off, looking like a gay, hippy commune of bread people.

Leaving the garage, I looked at the clock to note that I had to really speed to get to class on time, and calculated my right turn, my left turn, the lights I would wait for, the next right, the curvy road ahead and the right turn in to the yoga studio parking lot.

Would we make it…with all this damned pumpkin and cranberry bread?

After my right and left turn, after the series of lights, after the next left turn…I sped past a man and woman walking alone on a sidewalk.

He, a striking man with coal black hair. She, with piercing eyes, wearing a hijab.
I sped right on by, noting them, wondering what their thoughts were on this morning…determined to not be late.

And again, that still, small voice. HELP THEM BREAK BREAD.

This time, the universe was shouting, as I hit the brakes, and began backing up our bread wagon, causing fear to creep up in the eyes of the people I had just passed.

“What are you doing?”

My spouse asked the question, barely able to finish before I answered: “I’m going to practice what I’m about to preach.”

The man and woman alone on the sidewalk slowed and looked at me like a nut, running towards them with a loaf of pumpkin bread.

“I just want you to know, I love you and I wanted to break bread with you this morning.”

They were stunned. “Thank you sir,” was all they spoke, before I turned, to get back in to our SUV and once again on our journey to the studio.

The remaining moments in the car were spent explaining to our twins, 8 and our daughter, 4, why I broke bread with this pair in particular.

“How do you know they even like pumpkin bread?” My son, Asher asked.

But I was changed and had a measure of peace for the interaction.

Maybe the change inside me was all that mattered…..

In the yoga studio, I asked our students to sit in a circle. Usually, I let them come in and sit wherever, and however they want without imposing anything on them.

“Today, I just don’t know to do anything but have us to form a circle.”

From the back, a woman could see what I was up to and pumped her fist: “YES! YES!”

I turned on some music, randomly from my play list and wouldn’t you know it? Snatum Kaur’s “WE ARE THE PEOPLE, THE PEOPLE OF LOVE” began to play.

I then told each student to stand, tell me their name and asked the rest of the class to guess if that student was a pumpkin or a cranberry type.

The class yelled out: “Cranberry?”

Up she came….to get a slice of pumpkin bread.

By the time 33 people had spoken their names, and the rest of us had had a shot at which type of bread the person would want….it was clear that most of the time, our guesses about a person’s tastes was wrong.

But we ALL loved bread.

And when the exercise was over, we all BROKE BREAD.

The room was clear of all of the “stuff” we’ve all been carrying around this week, and we enjoyed a deep, meaningful METTA meditation before listlessly drifting in to 15 minutes of utter, healing silence.

When the silence was over, I encouraged everyone to slowly open their eyes . Usually, class over, this is the time when people get up, begin their folding or rolling of mats, and talk again.

Today, they opened their eyes and just remained silent. Profoundly silent, as if trying to hold on to the feeling in the room for just a little bit longer.

So, I took the opportunity to offer to them a challenge:

This week, aside from your morning and your afternoon 20 minute meditations, I challenge you to go buy a loaf of bread, go knock on someone’s door and hand them the bread….

“HELP THEM BREAK BREAD,” I encouraged.

This week, in the frenetic beauty of the Las Vegas Valley, I trust that 33 families will find their way to their neighbor’s homes…carrying bread and the echo of the metta meditation in their hearts.

May we all find a little peace, and may it start…with following the still, small voice, and a warm loaf of bread.

Offered this Sunday night without ANY political expression whatsoever…but a prayer that our world will become breakers of bread once again.

Reed Cowan is an Emmy winning motivational speaker who has been awarded 17 Emmys and nominated for another twelve for his work as a television journalist; he has also delivered breaking news on CNN, MSNBC and FOX News, and is a documentarian whose 2010 full-length feature won the coveted GLAAD Media award, and was premiered at Robert Record’s world renowned Sundance Film Festival.

I pulled a @heartfulnesscards this morning .. and

Ever yearn to float above it all? 🪁 What a fun

Look who came to check out our first Summer Twilig

It really is … beginning to feel a lot like the

Did you know that we have Gift Certificates? …