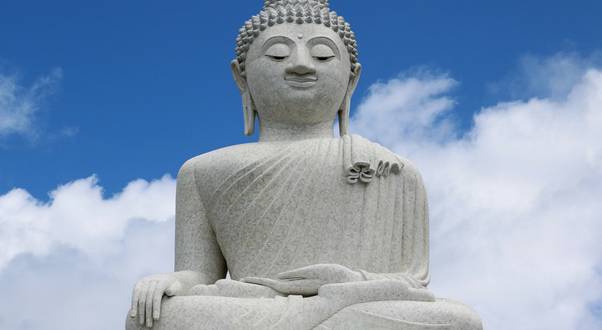 One of the most iconic images of Buddha is a seated position with hands in the mudra known as Bhumi-sparsha or gesture of touching the earth.

A Mudra (Sanskrit for ‘sealing’ or ‘closing’) is a symbolic or ritual gesture found in Hinduism and Buddhism. There are hundreds of different mudras, each creating a different ‘energy circuit’ using hands, fingers and sometimes even the whole body.

In the Earth Witness mudra the LEFT hand is held upright in the lap, palm facing upward, with the RIGHT hand extended across the knee with fingers pointing or just touching the earth.

There is a beautiful story about this mudra ..

According to Buddhist tradition, the final stage of Prince Siddhartha Gautama’s becoming the Buddha came while he seated beneath a Bodhi tree deep in meditation.

While he sat he was attacked by Mara, the rule of the realm of desire, who had arrived to challenge him. Mara attacked with an army strong with monsters and demons, but Siddhartha did not move.

Mara was afraid that Siddhartha was going to attain enlightenment and become the Buddha, and that he would do away with desire; so he kept trying to dislodge him from under the Bodhi tree.

But still Siddhartha did not move; despite sitting at the top of the mountains with the weather and storms raging around him, he sat still like a mountain and so frustrated Mara.

Finally, Mara was incensed and approached demanding that he change places, that Mara, and not a human being, had the right to sit under the Bodhi tree, and that his spiritual accomplishments were far greater, and his demon soldier cried out, “I am his witness”.

In response, the Buddha reached down and with his finger touched the earth, and the earth roared “I bear witness to you” and Mara fled.

And as the morning star rose in the sky the Buddha was enlightened.

The Bhumi-sparsha (Earth Witness) mudra represents unshakability or steadfastness; symbolizing the union of skillful means with the right hand touching the earth, and wisdom by the left hand on the lap in a meditation position.

In Buddhism, it is believed that the mudra brings the transformation of rage and anger to wisdom.

The simple beauty of this mudra is a welcome reminder that temptation can be confronted by strength and wisdom, and this is the reason we see many statues and images of the Buddha touching the earth.

Let us hold this mudra in our meditation, drawing on a deeper sense of grounding and stillness through the sense of touch.

What to do with your hands in meditation? read more about the Dhyana (meditation) mudra here

Are you on our FREE Monday Meditation Musings email list?

This FREE weekly email is designed to provide an inspirational and meditative kick-start to your week .. a little meditative nourishment! You can sign up for Monday Meditation Musings here.

I woke super super early this morning .. maybe it

I feel this ‘transformation’ nearly every time

I’m home! Back from a most wonderful, relaxing

I’m away right now .. taking a short but delicio

Tomorrow in the Southern Hemisphere .. is the Wint